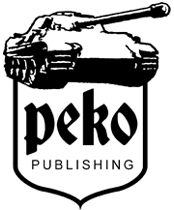 Although the idea itself was born earlier, the Hungarian resident Peko Publishing was established no more than 3 years ago in 2012. Even though this is quite a young company, it became popular and well known by the modelers in a short period of time. By 2014, as a result of their persistent work, they are known as one of the leading publishers who produce similar themed books. The key's to their success is that they own thousands of original photographs, most not yet published. In 2015 they will bring to life the second photo album series and also publish their first monograph in English. Their goal is to make new books in several different languages with special content year to year for the joy of the readers.

With Raupenschlepper Ost on the Eastern Front

Panzerwaffe on the Battlefield 3

The Tank Battles of Marshal Rokossovsky

German Support Vehicles on the Battlefield

From Bessarabia to Belgrade

An Illustrated Study of the Soviet Conquest of Southeast Europe, March-October 1944

The Soviet Offensive Operations in Western Hungary and Austria, March-May 1945

Panzerwaffe on the Battlefield 2